For the last day of the Great North Steam Fair, the typical British weather returned after three days of sunshine. This year's event saw many traction engines, steam wagons and other internal combustion vehicles return to the museum for the steam fair. Visiting Locomotive 'Portbury', which is on loan from the Bristol Harbour Railway and is due to stay at Beamish until summer, was pulling rides at Rowley Station. The miniature Cog Railway was also running. There were many traction engines to see passing through the town as well as the usual trams and buses linking the different areas of the site. One of the exhibits to join Beamish this year was London Transport Museum's 'Battle Bus' which can be seen in the video. In the colliery yard, Seaham Harbour No.18 Lewin can be seen shunting chaldron wagons with Head Wrightson 'Coffee Pot'. On the narrow gauge demonstration line, 'Hugh Napier' from Ffestiniog Railway and 'Jennie' from Amerton Railway were running with quarry hunslet 'Edward Sholto' which is on long-term loan at Beamish. Filmed on a very wet Sunday 12th April 2015. Thanks for Watching.
Kommentare ausgeschaltet 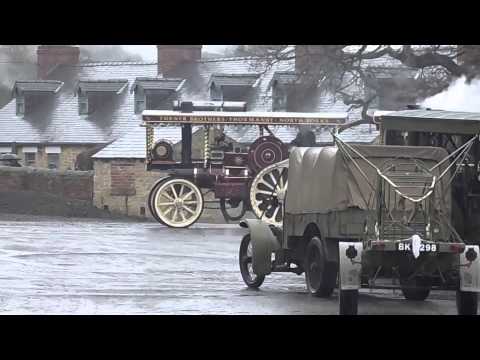