At long last, the day had arrived for the much anticipated movement of Erie Lackawanna/NJDOT U34CH 3372 from Passaic to Boonton. The unit had been stored at the New York & Greenwood Lake Railway's facility in Passaic for nearly 14 years, but now the time had come to bring it to its new home in Boonton. Morristown & Erie sent their two C-424s, 18 and 19, to Garfield in order to travel down the nearly abandoned Dundee Spur into Passaic to retrieve the U-Boat, running under the symbol MX-29. The two ALCOs arrived in Garfield at around 10:15, stopping on the Monroe Street crossing so the switch onto the Dundee Spur could be opened. During the short wait, Train 45 passed the ALCOs with GP40PH-2B 4207 leading the way and Cab Car 6700 trailing. This train was running a few minutes late. Once it passed, the switch was opened and 18 and 19 pulled onto the Dundee Spur. Once they were on the Dundee Spur, 18 and 19 were separated from each other. Due to the condition of the rarely used tracks, 18 was left behind just in case anything were to happen to 19 on its way to and from Passaic. Once everything was ready, 19 set off on its way, traveling down the middle of Monroe Street in one of the only instances of street running in New Jersey. 19 had to move very slowly in order to allow the conductor to walk in front of it, directing traffic around the train and stopping cars at intersections. Because of this, I was able to run ahead of the train and get a second shot of it before it left Monroe Street and pulled onto the bridge over the Passaic River. Shame that orange dump truck had to get in the way, though there wasn't much that could be done about it. At this point, one of my friends generously offered to drive me into Passaic to see the train once again, which I graciously accepted. We waited for the train at the Wall Street crossing, one of the last two crossings before reaching the New York & Greenwood Lake facility. As the train approached, it ended up coming to a stop due to some branches hanging right in its path. The crew had to bring out a chainsaw in order to cut down the branches. Once that was done, 19 was free to continue onward, crossing Wall Street and Passaic Street and entering the facility. Upon reaching the facility, 19 backed onto the storage track and was hooked up to the equipment standing between it and 3372. The equipment included New York & Greenwood Lake GP9 1268, Erie caboose C340, and FA1 7375. After clearing the switch so it could be thrown, 3372 was set off on the through track, and the rest of the equipment was put back into the facility. At this point, I walked back into Garfield and made my way back over to Monroe Street. Before long, 3372 made its appearance as it was pushed down the middle of the street by 19. This was truly an incredible sight, one that will never be repeated. Once the two engines made it back to where 18 was waiting, 3372 was sandwiched between the two ALCOs, and the crew began waiting for permission to open up the switch back onto the Bergen Line. Before then, two NJ Transit trains had to pass through. First was Train 1257 with F40PH-3C 4912 on the point and Comet V Cab Car 6712 at the end. This train was running on Track 2 due to track work between Saddle Brook and Rutherford. Next was Train 1270, passing MX-29 with Comet V Cab Car 6050 leading the way. Powering this set was GP40PH-2B 4209. Once the two passenger trains had passed by, the switch was opened up and MX-29 was allowed to pull onto the Bergen Line. When the switch was closed, the train continued on its way with 19 and 18 escorting 3372 to its new home. This was the last I saw of the train, but I do know that it ran down the Bergen Line to the West End wye, then traveled along the Montclair-Boonton Line all the way to the URHS shops in Boonton, where 3372 was dropped off. This was an amazing experience, and I am so happy that I was able to see this historical movement. Please enjoy!
Kommentare ausgeschaltet 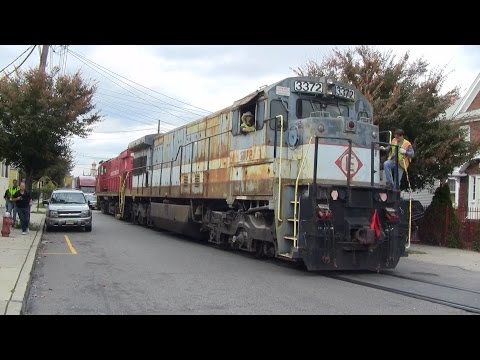