There are some crazy magic tricks out there, dreamt up by perhaps even crazier minds. Many leave us with a few possible ideas of how they were achieved, but some just leave us thinking: How the hell did they do that!? 10. Bullet Catch Pen & Teller The comedic magicians have been performing this trick since the 90's, where they have two volunteers sign two bullets before firing them at eachother's mouths. They finally reveal the other's signed bullet in their mouth. How did they do that? 9. The Chop Cup Paul Daniels Paul Daniels shook the world of magic back in 1979, with his twist on the classic cup and ball slight of hand. No need for Debbie McGee in this trick as the 'Godfather of modern magic' turned this classic into a hilarious act of showmanship. 8. Invisible Man David Copperfield Master of cheesy magician poses, Copperfield repeatedly uses supposed invisibility in his tricks. Albeit his own bodyparts, or slightly bigger things... likethestatueofliberty. 7. Sword Swallowing Thomas Blackthorne Thomas Blackthorne took the classic sword swallowing trick one step further when he shocked the audience by swallowing a jackhammer. Whilst turned on. Whether he did it for real or if it was just a trick, we'll never know. 6. Coin in Arm Criss Angel The scandalous street magician known for ripping people in half, swallows a coin somehow makes it move along his arm before cutting it out. Disturbing... 5. Dove Act Lance Burton Very much the classic magician, in this trick Lance showcases his tremendous art of slight of hand. With a whole hidden arsenal of white doves. Where does he keep them all? 4. Spitting Up a Live Frog David Blaine Street Magician David Blaine amazes onlookers by summoning a live frog into his mouth and spitting it out into one of their glasses of champagne. For anyone thinking he had it in his mouth all along, he performs the trick three times in a row. Gross. 3. Chinese Water Torture Cell Harry Houdini Houdini would be hung upside down by his feet into a tank of water, whilst handcuffed. Despite two Hollywood movies depicting The grandfather of Escapology dying in the Torture Cell, he actually died from a non-related, ruptured appendix. 2. Head Removal Cyril Takayama This trick starts with Takayama complaining about his throat. As many of us have experienced, an annoying dry tickle can cause you to cough off your head. Wait... What? Now that's impressive. 1. Tiny Plunger Jon Amstrong Amstrong manages to fool the great Penn and Teller with his plunger trick. Cutting the deck multiple times to reveal various chosen cards. Have you worked out the secret to any of these top magic tricks? Tell us Below! See more at www.brilliantnews.com
Kommentare ausgeschaltet 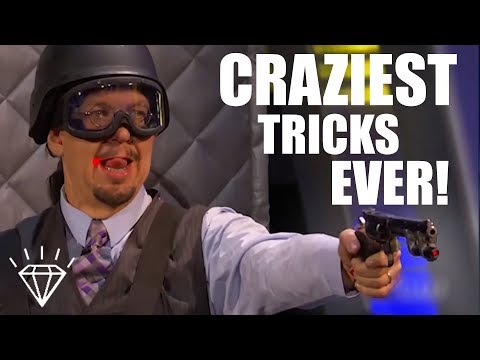