Subscribe to our channel! rupt.ly/subscribe German Chancellor Angela Merkel and French President Emmanuel Macron were among European Union heads of state and governments who arrived for an informal meeting in Sibiu on Thursday. Macron commented on Iran's partial withdrawal from the 2015 nuclear deal on Wednesday saying, "We must maintain it, Iran must stay within this agreement and we will do everything to make sure that happens." Upon arrival, the leaders were welcomed by Romanian President Klaus Iohannis. The summit will focus on future challenges and priorities for the EU, with some attention expected to be given to the Brexit process and discussions about European unity. The meeting is taking place two weeks before the 2019 European parliamentary elections. May 9 also celebrates Europe Day, marking the anniversary of the 'Schuman declaration'. Video ID: 20190509-024 Video on Demand: http://www.ruptly.tv Contact: cd@ruptly.tv Twitter: http://twitter.com/Ruptly Facebook: http://www.facebook.com/Ruptly
Kommentare ausgeschaltet 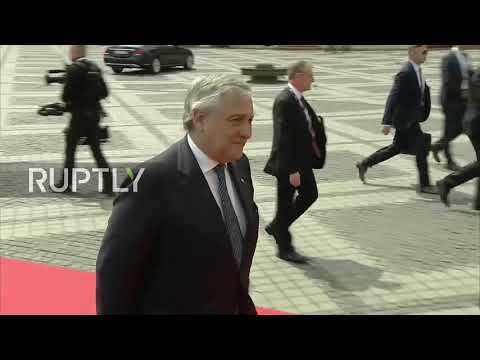