TOP 10 LARGEST CROCODILES In The World

Top 10 Largest Crocodiles in the World Crocodiles and aligators are quite terrifying creatures, no matter what the size, but we here at Top 5 Best only want to give you the biggest, so today we will be counting down the top 10 largest crocodiles in the world. Make sure you stay tuned till number one, the croc on that spot is probably the closet thing to Godzilla we’re going to get. Number 10. The Tawi-Tawi Crocodile On September 9, 2017, a 16 feet 11 in saltwater crocodile was captured by fishermen in Tawi-Tawi, an island province in the Philippines. According to the local people, a local fisherman first spotted the crocodile a few days before the capture, but initially, they thought it was a wooden log. But it moved when he approached it. He then reported the incident to the officials, and an operation was quickly organized to catch the monstrous croc. It took the combined efforts of the local fishermen and government officials to finally subdue the croc, which was reportedly extremely aggressive. A number of fishing nets were damaged and even a boat was wrecked as the people tried to capture the rampaging animal alive. They could have easily killed it but Philippine law prohibits the killing of crocodiles, and violators face imprisonment and a fine amounting to $2000. In the end, the rampaging monster was finally captured. It is now still alive and is under the care of the municipal government. Number 9. The Matara Crocodile and Jaws III It’s a tie between two crocs at number 9 on our list, one of them wild and the other one raised in captivity, which proves one thing; that crocodiles can grow to monstrous proportions both in the wild or in captivity. First up is a crocodile that was captured in Matara, Sri Lanka. Since dubbed the Matara Crocodile, it was found stuck in a canal leading off the Nilwala River. At 17 feet long and weighing close to a ton, it’s no wonder why it got stuck. A massive rescue operation was successfully launched the croc was eventually released back into the river, with officials hoping that it learned its lesson not to crawl up tight spaces. Tied with it is a crocodile that was born and raised in captivity, and is literally the biggest attraction of the Madras Crocodile Bank Trust and Centre for Herpetology, which is a reptile zoo and herpetology research station, located miles south of the city of Chennai, in state of Tamil Nadu, India. Lovingly named Jaws III, this massive 17 foot behemoth was born in the center itself back in 1970. No one expected it to grow to such proportions. He is also the favorite of the center’s founder, Romulus Whitaker, who had a lifelong history with Jaws III. Whitaker said that he even used to carry baby Jaws III under his arms in the 70’s. Number 8. Gustave Narrowly beating the two crocs occupying the number 9 slot on our list is probably Africa’s largest crocodile. Named Gustave by the locals, he is 17 feet 2 inches long and reportedly weights more than a ton. Those figures are estimates at best because no one seems to have the guts to capture Gustave to make the proper measurements. You see, Gustave is a Nile Crocodile, a species that is known to be particularly vicious. Not only that, Gustave is also a known man eater. Gustave is rumored to have disposed of more than 300 people who ventured too close to the shores of the Ruzizi River and Lake Tanganyika. And unlike most crocs who kill only for sustenance, locals report that Gustave also kills for pleasure and has a habit of picking off several people in an area and then disappearing for a while before repeating the cycle. Number 7. Gomek Gomek was a large saltwater crocodile captured by George Craig in Papua New Guinea. He was purchased by Terri and Arthur Jones in 1985 and was kept in Ocala, Florida for five years before being sold to the St. Augustine Alligator Farm Zoological Park in Florida. For 8 years he wowed spectators with both his amazing nutria-tossing abilities and his even more amazing tolerance of people. Feeders of the large croc were allowed to go into the enclosure and get as close as 1 meter from the large animal without any fear of attack. While feeders still used long tongs to feed Gomek, he was generally considered to be a “tame” crocodile and was the favorite of the Alligator farm and people around the nation. If you're new, Subscribe! → http://goo.gl/djmfuX Facebook: https://www.facebook.com/Top5BestShow Top 5 Best is the #1 place for all your heart warming stories about amazing people that will inspire you everyday. Make sure to subscribe and never miss a single video! Leave a like for more shark tank, pawn stars, dr. phil, and other tv show business content. On Top 5 Best, we like to help you in mindset productivity, whether it's how to make more money videos, or going over the biggest mansions in the world, we show everything here! Make sure to subscribe for more amazing videos everyday! family friendly pg clean #viralstory #amazingpeople #top5best
Kommentare ausgeschaltet 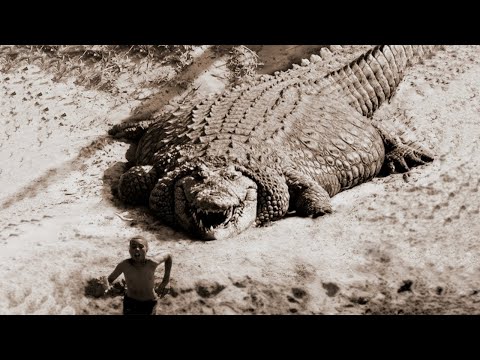 TOP 10 LARGEST CROCODILES In The World