http://www.ThunderStormVideo.com - Very large hail approaching baseball size and hurricane force RFD winds cause widespread damage in Guthrie, TX. This chase day was a bit of a difficult one for us. We started the day in Norman, OK with an initial target of western Oklahoma. As we got on the road we soon realized that the greatest threat for storms was going to be southwest of us in NW TX around the Childress area., We traveled westbound on the I-40 and then cut south in Shamrock. We attempted to get south of the ongoing storms in that area but opted out of that when a supercell just to our west went up. It was right on our tails as we entered the town of Guthrie so we pulled off and watched as the area of rotation passed just to our east. It wasn't long before we got into very large hail that ranged from golf ball to baseball size. We took shelter under an abandoned gas station overhang with a few other vehicles and rolled video. While I do have hail protection on my Xterra, it's main purpose is for those times that we are caught out in the open while chasing. But if a shelter is available, I'll gladly take it to minimize the body damage. After the hail a very intense RFD blast hit the town with hurricane force winds which caused extensive tree and roof damage. Thankfully though after doing a run through of the town to see if anyone was in need of assistance, we didn't come across, or hear of any injuries. Large hail was still lying everywhere long after the storm had passed. What a chase day! This definitely was one of the more intense chases I've experienced! Scott McPartland SevereWeatherVideo.com
Kommentare ausgeschaltet 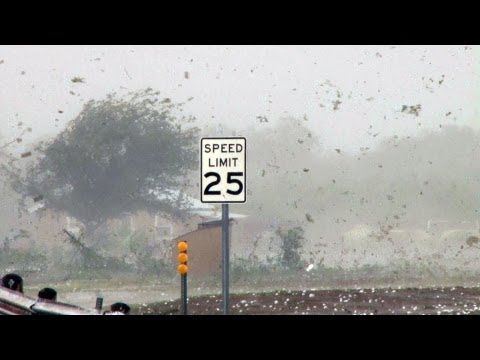