Top 10 stories of the luckiest lottery winners to ever win the big jackpot! Subscribe to our channel: http://goo.gl/9CwQhg Other Videos You Might Like 10 Stupid Lottery Winners https://youtu.be/HiUpBJVc-Fk Shocking Before-And-After Drug Use Photos https://youtu.be/LANc5GtFg1s Description: When it comes to winning the lottery, you have a better chance at getting struck by lightning. Winning the jackpot has odds of 1 in 175 million. So basically, winning the lottery is a remarkable feat. Success stories from the lottery and scratch off tickets usually consist of a person who goes and buys their ticket, and wins immediately. It’s the stereotypical fairytale that leads a person to a life of wealth and luxury. But the people in this video won the lottery through extraordinary circumstances that defy all logic. It is enough to inspire anyone to try to win the lottery through this unique means, even though they are extremely rare and likely impossible. For example, take the story of Bill Morgan, who was living in Australia as a truck driver. In 1998, after he was in a terrible accident, he was declared dead for 14 minutes before being revived. But then he was in a coma for 12 days, and was placed on life support. His family was facing the decision to shut off the machines when he came to and he quickly recovered. A year later, he bought a scratch off ticket and won $17,000. Then after the media found Morgan’s incredible story of defying death and winning the lottery, they bought him another ticket so that he could recreate the moment on camera. While filming, Morgan actually won $170,000 from the ticket. Then we have the story of Calvin and Zatera Spencer, a married couple from Virginia. They won the lottery three times in one month. The first ticket was bought on March 12th, from which they won $1 million. Then they bought 10 more tickets on March 26th, and won another $50,000. Finally, the next day, Calvin bought another ticket and won $1 million. Hopefully this couple stays indoors during a thunderstorm since they defied those odds three times in one month. Multiple winnings from one person seems to be becoming a thing, which makes you wonder whether there really is a trick behind picking numbers and scratch cards, and not just up to pure luck. James Bozeman, Jr. ended up winning the lottery two years in a row after buying tickets from the same 7-Eleven near his hometown in Tallahassee, Florida. The first year he won $10 million and his second year he won $1 million. Most winners have been playing the lotto and scratch card game for several years with no luck. But there are also stories like Lisa Quam, who won the lottery on her first try. She had never picked out numbers before in her life, and decided to buy a lotto ticket on a whim while she was grocery shopping. She ended up getting all six numbers correct and winning the $90 million dollar Powerball jackpot. Talk about a lucky woman! There are more incredible lucky stories where this came from. Who knows, perhaps you might be inspired to pick a few numbers and scratch off and some tickets after watching this video and we can add you to the list! Our Social Media: Facebook: https://www.facebook.com/TheRichest.org Twitter: https://twitter.com/TheRichest_Com Instagram: http://instagram.com/therichest Featuring: Bill Morgan Carmelo Mercado Lisa Quam James Bozeman, Jr. Virginia Fike Deisi Ocampo Joseph Morrah Jerry Ritieni Richard Noll For more videos and articles visit: http://www.therichest.com/ TheRichest is the world's leading source of shocking and intriguing content surrounding celebrities, money, global events, society, pop culture, sports and much more. We create high quality top 10 and top 5 list based videos filled with mind blowing interesting and entertaining facts you are going to love and enjoy. Currently updating every day!
Kommentare ausgeschaltet 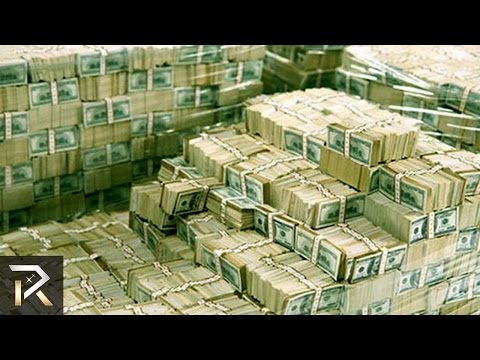