Like what we do? Please Donate: http://tinyurl.com/donate-to-the-camps After only 3 days in Xi'an (not enough time!) and our Chinese visa running out, we had to high tail it to Beijing... or, high speed rail. HA! Watch as we go as fast as we've ever gone and explore the ancient, imperial Forbidden City! ☑SUBSCRIBE ☑LIKE ☑SHARE ☐GET ON PLANE ________________________________________­______ FOLLOW THE BEARD! ✩ Instagram - http://instagram.com/becausewecamp ✩ Blog/Website - http://www.becausewecamp.com ✩ FaceBook - https://www.facebook.com/becausewecamp ✩ Twitter- https://twitter.com/Becausewecamp ________________________________________­______ MUSIC ♪ ‘Cult’ by Ramzoid SoundCloud - https://soundcloud.com/ramzoid 'Silk' by Thrupence Bandcamp - http://thrupence.bandcamp.com/ ________________________________________­______ Transcript: Noah - After 3 weeks of overland travel starting from HongKong, we were ready to enter the final phase of our trip through China with a high-speed train ride to Beijing. Under normal circumstances, we would have taken the slower yet cheaper over night train, but because we failed to plan our route far enough in advance, we we’re left with few other options. In the end though, we didn’t let the extra cost bother us too much, since it gave us an opportunity to experience high speed train travel for the first time, while also furthering our goal of traversing the length of the country entirely overland. Carrying a quarter of the world’s total rail traffic, China’s railway network is one of the largest and busiest in the world. In 2007, high speed rail service was introduced and since then, ridership has skyrocketed to over 1.3 million passengers per day on the HSR network alone. In December of 2012, the high speed route between the Xi’an North and Beijing West railway stations was opened. With the trains approaching a maximum speed of 300km/hr, the journey between these two monster cities can be made in just under 5 hours. Lynn - Built in 1406, the Forbidden City is an enormous complex that consists of 980 buildings, spanning 180 acres. It took 14 years to complete this behemoth city and required over a million laborers and 100,00 artisans. The Forbidden City was named as such, because it was forbidden for any commoner to enter. Not only that, any commoner who even saw the emperor with his commoner eyes was killed, even if the emperor was outside the city gates! So I’m not going to lie, when I crossed through that threshold as a foreigner, it gave me goosebumps. For 500 years, 24 emperors lived and ruled from this ceremonial and political center. Many servants and even some emperors lived their entire lives within these walls. We started to feel the same sense of being in a bubble as all the halls, gardens and temples started to look the same. There are signs in English scattered all over the city but even after reading them, the significance of what we were looking at was still a bit lost on us. Our favorite signs though, were the ones that included the imperial names of the buildings, some of our favorites being: Belvedere of Embodying Benevolence, Pavilion of Auspicious Clarity, Palace of Gathered Elegance and... The irony of the once forbidden city, is that it’s now one of the most touristed places in all of China with over 7 million visitors a year! Here you can also get your fill of knick knacks and even a DVD experience of flying over the city… if you’re into that sort of thing! You have to use your imagination, but if you find yourself in a quiet corner of the city, it’s possible to get a feeling of being in ancient China. Hopefully, you’ll imagine yourself as royalty and not as a concubine… or a eunuch. Thank you for watching: Beijing by Bullet Train | The Forbidden City -~-~~-~~~-~~-~- Watch: "Exploring an abandoned part of Zhangjiajie National Park in China" https://www.youtube.com/watch?v=2EOU59_Inm0 -~-~~-~~~-~~-~-
Kommentare ausgeschaltet 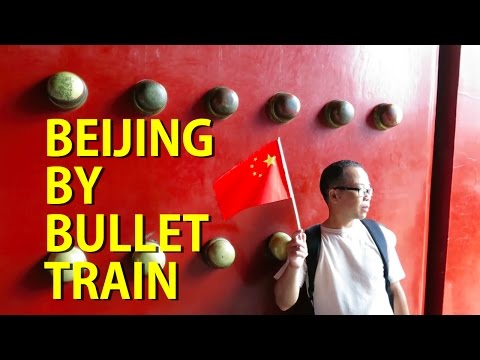