Watch the great Dolphin Show in Dubai Dolphinarium. See amazing stunts performed by Dolphin and have fun without visiting Dubai. This was shot on Dubai New Year's eve before the Dubai Festival after going from Burj Khalifa to Dubai creek park. Dubai Dolphinarium is the first fully air-conditioned indoor dolphinarium (Seaworld) in the Middle East, providing habitat to dolphins and seals, allowing the public to watch and interact with them through live shows and photo sessions. It is located in the creek side park at Bur Dubai near the Children's City. Dubai Dolphinarium was opened on May 21, 2008 by Dubai Municipality, and is sponsored and supported by Dubai government to provide the general public with entertainment and also educate them regarding dolphins, seals and other marine organisms. It was also reflected that interacting with such friendly mammals like dolphins will motivate young generation to protect marine life and the environment. NOTE: NEGATIVE OR CAPTIVITY COMMENTS WILL BE MODERATED. I DO NOT RUN THIS SHOW, I WENT THERE ON TRIP AND THOUGHT THAT IT WAS TOO GOOD TO BE SHARED! But after I did research about how this things work and turns out we should not encourage such shows, but let it be here for good. I was 14 when i saw this and will not go to any such shows in future. Thanks for watching. Like, Share and Subscribe.
Kommentare ausgeschaltet 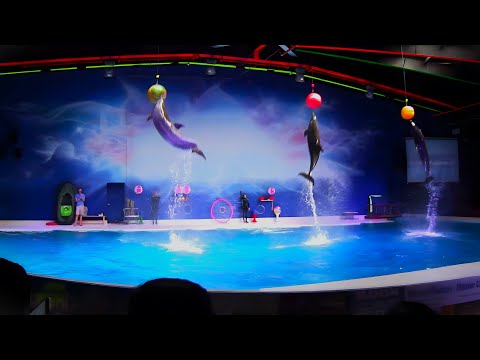