In incredible footage, an African rock python swallows a springbok antelope. It has jaws designed to engulf meals three times bigger than its head. ➡ Subscribe: http://bit.ly/NatGeoWILDSubscribe ➡ Watch all clips of World’s Deadliest here: http://bit.ly/Worldsdeadliest ➡ Get More World’s Deadliest: https://on.natgeo.com/2kl3vFA #NatGeoWILD #Python #WorldsDeadliest About World's Deadliest: World’s Deadliest Predators is a new series that looks at most riveting moments of animal predation, breaking down the struggle for survival and supremacy into five action-packed episodes. Top Hunters focuses on the most feared animals in their class: animals at the top of their food chain; the hunters who are prey to no other animal. Killer Packs illustrates when predators multiply their advantage over prey by banding with others of their species to hunt. Lethal Weapons shows that the physical attributes and built-in concealed weapons have the ability to make an animal a top predator. Our Superpowers episode focuses on the animals that see, hear, and smell better than any others…and that relative to their size on are the fastest and strongest creatures on the planet. And whether it is over food, territory or sex, animals go to war within their species and against other species…Battles dissects these conflicts, from the strategy to the play-by-play. These five episodes bring together dozens of species, which are extraordinary, savage, and the World’s Deadliest Predators. Get More National Geographic Wild: Official Site: http://bit.ly/MoreNatGeo Facebook: http://bit.ly/NGWFacebook Twitter: http://bit.ly/NGWTwitter Instagram: http://bit.ly/NGWInstagram About National Geographic Wild: National Geographic Wild is a place for all things animals and for animal-lovers alike. Take a journey through the animal kingdom with us and discover things you never knew before, or rediscover your favorite animals! Python Eats Antelope | World's Deadliest https://youtu.be/x0rk5zh7RaE Nat Geo Wild https://www.youtube.com/user/NatGeoWild
Kommentare ausgeschaltet 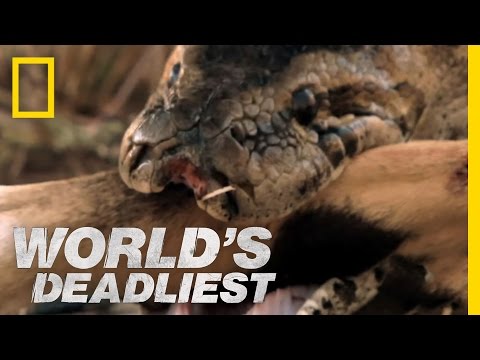