Bassist/vocalist Marcel ‘Schmier’ Schirmer co-founded thrash legends Destruction in Weil am Rhein, Germany, in 1984. Albums such as 1985’s "Infernal Overkill", 1986's "Eternal Devastation" and 1987’s "Mad Butcher" EP secured Destruction’s place in the German Big Four alongside countrymen Kreator, Tankard and Sodom. Their latest album "Born To Perish" was released in 2019, and received with open arms by the metal community, and we took the opportunity at the time to speak to Schmier about the release.

Now, a mere year after, Destruction are back, bringing great news for the metal community: not only are they set their mark and ended the concert break due to COVID-19 with two impressive live shows in front of 300 people each at the legendary Z7 Club with a capacity of 1600 people in Pratteln, but they also released a killer live album, entitled "Born To Thrash - Live In Germany" in digital format some weeks ago. The live release comes out in physical form July, 17th, with a world map, the fans named the destination of their very first Destruction concert in a previously launched campaign. The album will be available within the digipak and vinyl-version in black, red, transparent and picture vinyl. Your copy of "Born To Thrash - Live In Germany" can be purchased at this location.

Recorded live at the Party San festival in Germany when their last studio album "Born to Perish" was just released, "Born To Thrash - Live In Germany" showcases a new Destruction, with a four piece lineup. The addition of Damir Eskic as the second guitar player adds more depth and weight to their sound, and new drummer Randy Black wastes no time in showing his true colors on the live setting either. The end result is a skull crushing release, with the band's trademark thrash sounding as fresh and relevant as it could - you can read our own review of this live album here -

Sonic Perspectives collaborator Rodrigo Altaf had the chance to catch up with Schmier one more time, and they discussed the live album, the plans for the upcoming show, the pros and cons of a four piece lineup and much more. 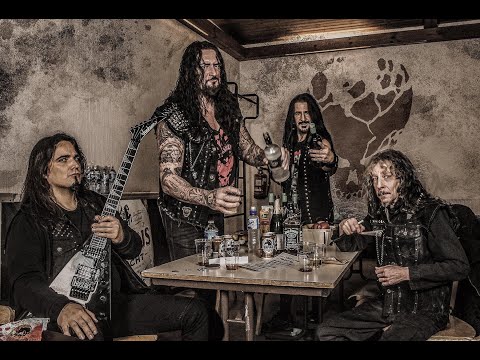