We’re back at it for the second season of the Mandalorian, as things get crazy.  Mom enjoyed this, and we had quite a bit to talk about regardless, what with Breaking News from the Week!  But Yeah, the Space Western Rides again!

Updated News:
On February 10th, LucasFilm announced that Gina Carano, former MMA fighter who played Cara Dune, was no longer employed by the company and would no longer appear in any future Star Wars projects.  LucasFlim decided not to work with Carano on any further projects after posts on social media that related American Conservatives with Jews in Nazi Germany.  This comes on the tails of earlier posts, where the actress ridiculed COVID-19 Mask mandates, falsely suggested that the 2020 US Presidential Elections had widespread Voter Fraud, disparaged the Black Lives Matter movement, and was accused of transphobia for her mocking of the preferred gender pronouns by transgender individuals and their allies.  At the time of writing, conflicting information suggest that Cara Dune was not intended to appear in the 3rd Season of The Mandalorian, but was instead to star in Rangers of the New Republic.

In the wake of Lucasfilm deciding to remove Carano from future productions, many of the conservative voices in America have demanded that Pedro Pascal also be removed the show, due to him having written disparaging things about conservatives and right wing media figures/events.  The #canceldisneyplus has also begun trending on twitter, with those upset about the removal of Carano from future Star Wars projects asking people to cancel their subscriptions to Disney+.

As of writing, Season 3 of The Mandalorian is in pre-production, with no release date confirmed.


New Characters
Giancarlo Esposito - Moff Gideon
One the remaining high ranking Imperial officers left after the fall of the Empire, he leads his own squad of Imperial Remnants.  He participated in the Great Purge that wiped out the Mandalorians from the planet of Mandalore and scattered the remaining survivors to the stars.  He is also the wielder of the Dark Saber, a weapon he presumably claimed during the Purge through unknown means.

Temuera Morrison - Boba Fett
The original Actor for Jango Fett returns to play Boba Fett, his cloned son.  It’s fitting as the actor was an unaltered clone, and by the time of the Mandalorian, Boba Fett would be in his early 40s, though the actor is in his 60s.  Presumed the Cloning process isn’t perfect.  Boba Fett in the series does not consider himself a Mandalorian, and never has, with the name of his armor being ‘Mandalorian Armor’, thus where the title and name presumably comes from.

Mercedes Varnado - Koska Reeves
Also known as Sasha Banks in the WWE.  The character is a member of Bo-Katan’s Nite Owls, a primarily Female group of Mandalorians, former members of Death Watch, who are seeking to reclaim Mandalore.  The wrestler purposefully chose a hair style that could be mimicked in Cosplay, and preformed most of her own stunts, including some Wrestling moves.

Katee Sackhoff - Bo-Katan Kryze
Last known wielder of the Dark Saber prior to the events of the Great Purge of Mandalore, she leads her Nite Owls in dismantling Imperial targets and collecting weapons/resources for her team, in the efforts to reclaim Mandalore.  Her former sister, Sabine Kryze, was the ruler of Mandalore prior to Death Watch’s interference and political coup of the government.   Katee Sackhoff is no stranger to Sci-fi series, having previously played Kara "Starbuck" Thrace in the series Battlestar Galactica.  She has also previously voiced the character of Bo-Katan in the Clone Wars tv series.

Rosario Dawson - Ahsoka Tano
Original debuting in the CG animated Clone Wars, she is the former padawan to Anakin Skywalker, who left the Jedi Order after she was framed for a crime she didn’t commit.  Though it was later discovered that she was framed, she left the Jedi Order, feeling that it had lost its purpose and sought to find her own way through the force.

She would next be seen in Rebels, roughly 5 years before the events of Episode 4, as an aid to the crew of the Ghost who act as a terrorist cell for the Rebellion.  Ahsoka Tano aids the former padawan, turned full Jedi, Kanan Jarrus and his new student, Ezra Bridger, in the ways of the Force, along with aiding their missions.  Ahsoka is presumed dead upon a fight with Darth Vader during the attempt to find a Sith Holocron, but is eventually saved from death by Ezra in the ‘World between Worlds’.  Ahsoka, though saved, did not continue with the Rebellion, instead choosing to follow a spiritual path, as she had been saved from death.

By end of the events of Rebels, she and Sabine Wren(Former wielder of the Dark Saber), set out to find Ezra Bridger, who save the Ghost crew at the end of Rebels, but has be 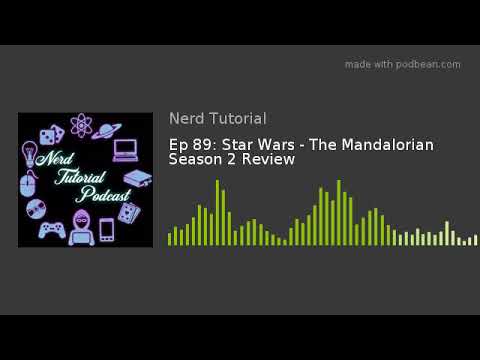 Source: https://www.podbean.com/eau/pb-9g5v3-fc082c Topic: Mandalorian Season 2 Review   We’re back at it for the second season of the Mandalorian, as...