Proof of Work (PoW) is a more centralizing force on blockchains than Ethereum's implementation of Proof of Stake (PoS).

First of all, PoW, as it is now on BTC, is very competitive. You can't just go get a computer and start mining BTC. To mine BTC, you need a large data center. You need the economies of scale, meaning you need to have a certain size of investment, to make a return on your money.
That is a centralizing force because the only people who can do mining are large organizations.
I'm not saying BTC itself is centralized, because there are many such large organizations doing the mining, which makes it decentralized.

PoS, on the other hand, allows anybody to be a validator. Because it is simpler, and you don't need economies of scale, more people can and will be validators. And that is a decentralization force.

I also actually think that it is more efficient for individuals to be validators than it is for large organizations. Organizations have overhead and there are some inefficiencies that come with being large. An individual on the other hand just needs their laptop and they can get set up to perform the validation at no huge cost. Similar to how driving an Uber is lower cost than driving a Taxi, because it's a car that you had anyways.

Another argument that I hear from Bitcoiners is that because it's so expensive to do the PoW and the mining, this give inherent value to BTC. That is not true. The value in BTC as a digital gold or reserve asset, is the restricted supply, which is a result of its algorithm and the way it works.
Now ETH also has restricted supply, and will be more valuable with PoS.
Some argue that they can just change the algorithm and create more tokens. Actually no, they can't. The algorithm has been created over many years with everyone agreeing that they want to set a fixed supply.
The fact that ETH is inexpensive to do the validation does not make it less valuable. It makes it less expensive to create this valuable asset.

The final thing to be mindful of is to keep an open mind. A while ago we were worried about BTC because 50% of the mining was done in China, and there was concern about China coming and attacking it. Finally they banned it and the problem went away.

Here is the link to an Up Only podcast episode where Zooko, founder of Zcash, talked about this and may have explained it better than me.
https://youtu.be/AjC9T938o3Q?t=2993

If you have any questions or thoughts, let me know in the comments below! 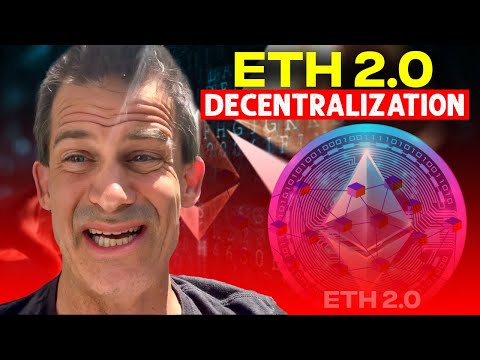 Proof of Work (PoW) is a more centralizing force on blockchains than Ethereum's implementation of Proof of Stake (PoS). First of all, PoW, as it is no...