In this episode, We will discuss in detail Famous Bitcoin Haters. Shifu Digital.
Launched back in 2009, Bitcoin has been a part of the cryptocurrency market for the past 12 years. It is the first largest cryptocurrency ever to exist and one of the most popular ones that you’ll find on the Internet. With over 68 million wallet users worldwide, Bitcoin has famous investors, including Elon Musk and Paul Tudor Jones.

While there can be many reasons why people hate Bitcoin, mentioned below are some who detest Bitcoin.

✴✴✴ Bill Gates
Co-founder of the Microsoft Corporation and the 4th richest man in the world, Bill Gates is a popular American business magnate, author, software developer, and investor. He is also the founder of the world’s largest charity organization known as the Bill and Melinda Gates Foundation. In an interview, Gates stated that he is not keen on Bitcoin as it is not a sound investment, and large transactions can become inconvenient. He further criticized the currency by saying that there is a rise in cases of money laundering, tax evasion, and terrorist funding.

✴✴✴ Warren Buffet
American businessman, investor, and philanthropist Warren Buffet is currently the CEO of Berkshire Hathaway. He is one of the harshest critics of Bitcoin and holds similar views about all other cryptocurrencies. He denies the value of Bitcoin and has the belief that it will soon face a downfall. During one of his shareholder meetings, he stated that Bitcoin is “probably rat poisoned squared.” He shared that he will never invest in a cryptocurrency on another occasion because he believes that they have no value or returns.

✴✴✴ Nouriel Roubini
Famous for his extremist views against Bitcoin, Nouriel Roubini is an American Economist who teaches at The New York University. Popular for his discussions with crypto-influencers Vitalik Buterin and Peter Van Valkenburgh, he holds the opinion that Bitcoin is an over-hyped and useless digital currency that leads to scams, price manipulation, and fraud. He once called Bitcoin and other cryptocurrencies shitcoin and refused to acknowledge them as digital currency.

✴✴✴ Paul Krugman
A well-known American economist, columnist, and professor Paul Krugman is a columnist at the New York Times and a professor at the Luxembourg Income Study Center. He is skeptical about Bitcoin and believes that Bitcoin is evil as it holds no value or return. The Nobel Prize winner of 2008 has also stated that Bitcoin is not a stable store of value, and the prices have been driven up due to widespread speculation. He thinks of it as a cult that has no fundamentals and has also given predictions about the demise of Bitcoin countless times.

While constructive criticism of Bitcoin is healthy, openly criticizing it and calling it words is not okay. Bitcoin might not be perfect as a digital currency, but there is always room for improvement after picking out the parts that need correction. However, Bitcoin will never be good enough for those people who keep on eyeing it as ‘evil’ as they won’t be able to change their perspective on it.

What Happened to John McAfee?
↪↪ https://youtu.be/FMrhtvF5RUQ

Top 10 Most Expensive Robots in the World
↪↪ https://youtu.be/-0OLvNSzgts

If you enjoy our video then hit the like button. Write in the comments what the video looks like and what region of the world you are watching from. And Share with your friends who want to watch "The Shifu Digital" video, and subscribe to my channel to get another video 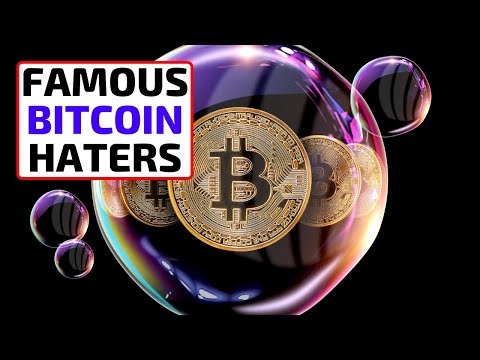 In this episode, We will discuss in detail Famous Bitcoin Haters. Shifu Digital. Launched back in 2009, Bitcoin has been a part of the cryptocurrency ...