Norway has been elected as one of the new nonpermanent members of the UN Security Council and will take up its seat from 1 January 2021 until December 2022.

Norway will draw on its long experience of peace diplomacy to strengthen the Security Council’s conflict prevention and resolution efforts. It will focus on enhancing the protection of civilians, promoting the role and participation of women in international peace and security, and highlighting the links between security and sustainable development, including security
concerns related to climate change.

Over the past three decades as a peace broker, specialising in mediation aimed at conflicts from Colombia to Sri Lanka, the Philippines and the Middle East, Norway has been hailed for its efforts in conflict resolution, and its support for multilateral alliances. This election comes at a time when interest in UN politics has been renewed by the Covid-19 pandemic and fundamental questions arise of what a renewed global order will look like.

As the multilateral system is challenged by large countries withdrawing their support for engagement on the world stage, what can smaller nations do to shape the debate? How can Australia support Norway in seeking solutions for a common future?

AIIA Victoria invites you to join Ambassador Larsen to discuss Norway’s aims and aspirations as a UN Security Council member. HE Mr Paul Gulleik Larsen is a career diplomat with 27 years of international experience, including Norwegian Ministry of Foreign Affairs postings in Belgrade (as Chargé d’Affaires 1991-1994), in New York (as Counsellor for Norway in the UN Security Council 2001-2002), and in Moscow (as Deputy Head
of Mission 2002-2007). Outside the MFA, Paul has served as diplomatic advisor in the Office of the Prime Minister of Norway in 1998-1999, and as Chief of Staff and Director at the UN World Food Program (WFP) in Rome 2007-2013. While at WFP, Paul sat in the Strategic Leadership Group and represented WFP in G8, G20 and UN inter-agency bodies. After returning to MFA in Oslo in 2013, Paul served in the UN Department as Project Director for policy and coordination of Agenda 2030/SDG and as Special Envoy for Security Council Affairs, responsible for strategy and policy for preparing Norway’s membership of the UN Security Council in 2021-22. As Ambassador of Norway in Canberra from September 2018, Paul is responsible for Australia, New Zealand, Papua New Guinea, Fiji, Solomon
Islands, Vanuatu, Tonga, Samoa, Kiribati, Nauru, Tuvalu and Cook Islands. Paul has a Master of Science degree from the London School of Economics and a B.A. from the University of Oslo. He received the French Ordre du Mérite Agricole during the French G20 presidency in 2011. 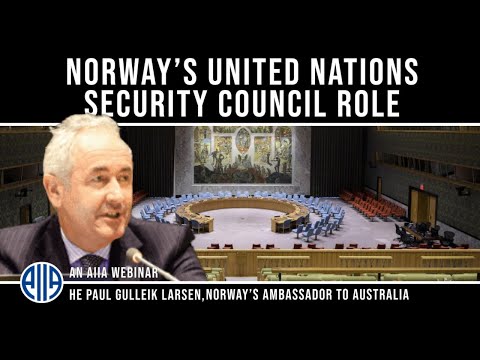 Norway’s UN Security Council Role HE Paul Gulleik Larsen, Norway's Ambassador to Australia Organised by AIIA Victoria. Norway has been elected as one ...