Good morning, it’s Tuesday January 12th and this is The Herald Review’s podcast, the Daily Chirp. We’re excited to bring you a closer look at one of our top stories, events in the community, local history, sports, and more.

Today - A videographer who was accosted by police after he recorded an animal control officer at a public park intends to sue the city and the police department.

But first, a quick message from our sponsor.

Before we begin, some local history.

Willcox is the birthplace of Rex Allen, who is known as "The Arizona Cowboy". He starred in several Westerns during the early 1950s as well as in the television series Frontier Doctor.

Today’s history is brought to you by Benson Hospital. Benson Hospital’s comprehensive rehabilitation team strives to get you back on your feet and improve your lifestyle. Offering Physical, Occupational and Speech therapy. For more information visit bensonhospital.org or call 520-586-2262.

A videographer who was accosted by police after he recorded an animal control officer at a public park intends to sue the city and the police department for injuries he says that he suffered after officers handcuffed him and took him to the ground face first.

Nolan Gouguet of Bisbee News Network is asking the city to pay him not only for his medical expenses of over $15,000 but also $1 million for physical and emotional distress.

That was audio from the Bisbee News Network’s video of the incident that’s been posted to their youtube channel.

Gouguet’s notice of claim hinges on accusations that the city did not properly train its police or its former animal control officer, Dolores Luberto. Luberto has since resigned.

Gouguet also claims he was falsely imprisoned by three officers and that they used excessive force.

The notice of claim states that Nolan is damaged financially and in his good name and reputation as a result of the false arrest which was published in the newspapers. This has caused him extreme emotional distress, among the other physical and mental injuries.

Luberto approached Druckman, asked her why she was recording, and began arguing with her until one of the officers approached Luberto and led her away.

Now, we’d like to take a moment to highlight On The Vedge - a new vegan restaurant that opened last month in Bisbee!

Brought to you by ApexNetwork Physical Therapy. Voted Best of Cochise County 2020, ApexNetwork provides exceptional care to the Sierra Vista and Benson communities. Choose ApexNetwork for all of your physical therapy needs. To learn more, go to ApexNetworkPT.com.

On the Vedge restaurant opened just before Christmas, and already it is a townie favorite. It serves up non–GMO organic veggies, homemade breads, sauces and dressings in a tiny kitchen, even by Bisbee standards. It was started by native Bisbeeite Mike Donahue and his new partner Katie Hartman.

The two met at the Bisbee Farmers Market. She was selling vegan cookies and he sold vegan food.

On the Vedge, at the base of Castle Rock, serves Middle Eastern and Mediterranean cuisine made by Hartman, a pre–COVID–19 caterer. She brings a mass of knowledge of herbs and spices and adds her own pizazz. Her curries change weekly and many people have come back to see just what she has up her sleeve.

Looking for something new for lunch or dinner in Bisbee? Put On the Vedge on the list.

Before we go, we’d like to take a moment to remember the life of Abraham Flores Gatmen. Abraham was a devoted husband, and a loving father and grandfather. He was born in the Philippines. Abraham joined the Army at the age of 26. When he was stationed in Germany he met and married the love of his life, Susie. They lived a joyful and memorable life of 47 years together. Their greatest accomplishments were having their 2 daughters Jeanette and Jessica. He was generous and lived life to the fullest. He was also a devoted member to the Knights of Columbus and St. Andrew the Apostle Catholic Church.  He was also an active member and former President of the Fil-Am Club of Southern Arizona for many years.

He retired from the military after 22 years of service and set his roots in Sierra Vista. Abraham’s greatest joy was being around his 3 grandsons. He’ll be greatly missed. Thank you for taking a moment today to remember and celebrate Abraham’s life.

Thanks for tuning in to the Herald Review podcast today, join us again on Thursday! For more information on any of the stories you heard about today, visit us at myheraldreview.com.

Thanks for tuning in to the Herald Review podcast today, join us again on Thursday! And remember, the Herald Review is here for you with local news you can trust. For more information on any of the stories you heard about today, visit us at myheraldreview.com. Right now you can become a member starting at just $1.99 per week. 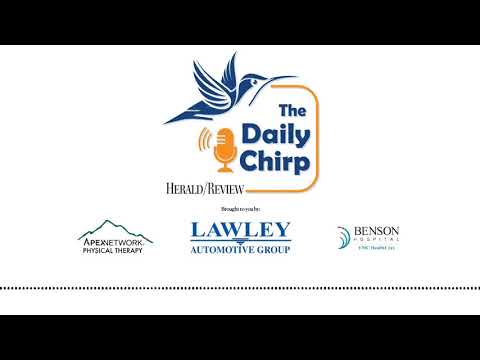 Good morning, it’s Tuesday January 12th and this is The Herald Review’s podcast, the Daily Chirp. We’re excited to bring you a closer look at one of o...