They thought he was hypoxic. He was plastered.

On May 18, 2016, about 0901 mountain daylight time, a Cessna P210N, N6609P, sustained substantial damage when it impacted a field in a flat spin about 4 miles northeast of Sheridan Lake, Colorado. The pilot, the sole occupant, was fatally injured. The airplane was registered to and operated by the Stubblefield Construction Company as a Part 91 personal flight. Visual meteorological conditions prevailed at the time of the accident, and the airplane was receiving VFR flight following from Denver ARTCC. The airplane departed the Rock Springs-Sweetwater County Airport, Rock Springs, Wyoming, about 0645 and was en route to the Wiley Post Airport, Oklahoma City, Oklahoma.

A transcript of the communications between the accident airplane and an air traffic controller indicated that, at 0842:36, the pilot transmitted, "I'm going down and I'm going down hard."

At 0846:23, the controller transmitted, "November six six zero nine papa suggest you descend to lower altitude at or below one two thousand uhh sounds like you might have an hypoxic situation."

The recorded radar data indicated that the airplane had maintained a straight-and-level flight track to the southeast at 17,300 ft pressure altitude until 0847. Then, the airplane entered a series of turns, climbs, and descents that ultimately put the airplane on a northerly course.

At 0853:16, the pilot transmitted, "I can show you what a p two ten can do." The radar data indicated that the airplane's altitude was about 11,700 ft pressure altitude at the time of the transmission.

At 0854:05, the pilot transmitted, "(unintelligible) guys want me to do Muller?" The radar data indicated that the airplane's altitude was about 12,275 ft pressure altitude at the time of the transmission.

At 0858:01, the pilot transmitted, "Let me show you what a (unintelligible) two ten can do." The radar data indicated that the airplane's altitude was about 10,950 ft pressure altitude at the time of the transmission.

At 0900:30, the pilot's last radio transmission stated, "You got it watch the center watch it go." The last recorded radar return at 0900:32 indicated that the airplane's pressure altitude was about 9,200 ft. Subsequent attempts to contact the pilot were unsuccessful.

The 64-year-old pilot held a private pilot certificate with airplane single-engine land and instrument ratings. He held a third-class medical certificate issued on November 11, 2015, with a limitation for corrective lenses. During his medical examination in November 2015, the pilot reported that his total flight time was 4,250 hours.

FAA records indicated that the pilot was involved in a landing incident in Boise, Idaho, on May 28, 2000. The pilot was found to be operating the airplane under the influence of alcohol with a blood alcohol concentration of 0.26 percent, more than six times over the legal limit of 0.04 percent for operating aircraft. The pilot surrendered his pilot and medical certificates after the incident. He reapplied for a medical certificate on July 5, 2005, and was granted an eligibility letter on August 10, 2005.

The airplane was a pressurized, single-engine Cessna P210N that was manufactured in 1979. No acrobatic maneuvers, including spins, were approved.

No mechanical issues were found that would have precluded normal operation, but during the onsite examination, a half-full bottle of vodka and numerous prescription and over-the-counter medications were found in the airplane.

He might have been hypoxic, but he was definitely plastered.

They thought he was hypoxic. He was plastered. 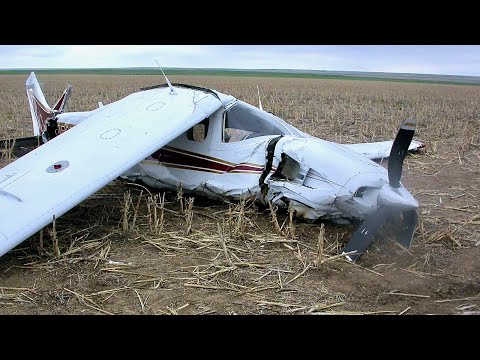