This the flight report from my last flight, the first since the pandemic started: https://www.youtube.com/watch?v=KMQsLgLuqQU&t=106s

Hello and welcome to a brand new flight report from me, in these strange times where traveling has for many been put to a halt due to the horrific pandemic ravaging the entire world. My first flight since the pandemic found its temporary epicentre in Europe was a couple of days ago, exactly five months after my last flight in February. This time, I’m back to flying Ryanair, approximately six months since I last flew it. I hadn’t booked a flight on the Irish low coster since January, when I took advantage of cheap fares from Manchester to fly to Gothenburg and explore this lovely Swedish city along with Oslo over the course of a few days.

Today, I’m flying to Edinburgh to Venice, in what is my return to my home country after 10 months since I last was in Italy: this marks the longest time that I’ve been abroad. Edinburgh Airport is definitely different compared to how I remembered it from pre-covid times. It’s not the first time for me to fly the Edinburgh-Venice route as I flew it already in 2017, although at the time the destination was the secondary airport of Venice, the one in Treviso, which is going to be closed until the end of the summer. Nevertheless, the airport here in Edinburgh is today much emptier than I remembered, with new lines and stickers everywhere on the floor to ensure social distancing for obvious reasons.

When I first landed in Edinburgh three days ago, I noticed 3 Jet2 aircrafts sitting on the tarmac. They are still there untouched, a sign of the deep crisis of the travel industry.

Masks are of course mandatory across the entire premises of the airport.

You can’t even sit down for the usual pre-flight pint at Wetherspoon’s, as it is still closed, although pubs were allowed to reopen in Scotland five days ago.

The main part of the terminal parallel to the runway was mostly empty, with just a single aircraft sitting at those gates. Most Ryanair airplanes were parked at the gates of the most remote area of the airport, towards the east side. There were also a couple of British Airways planes, connecting the capital of Scotland to three airports of the capital of the UK, namely London-City, Heathrow and Gatwick.

My gate is number 14. Although Ryanair is calling passengers all over the airport threatening last call warnings, as I arrive at the gate there is still quite a long queue to get boarding passes checked.

The aircraft taking me back to Italy today is a standard 14 year old 737-800 delivered to Ryanair brand new in 2005. It is currently based in Edinburgh, from where it frequently flies to destinations all over Europe.

Whereas the flight from Bristol to Edinburgh from a couple of days ago was mostly empty, capacity is today much better, with most seats taken. I managed to get a window seat on a row shared with only one other passenger sitting on the aisle.

The weather was kind enough to guarantee pretty nice views upon taking off. As we ascend towards the clouds, the estuary of the Forth and the other rivers on the shore of which Edinburgh is located becomes visible. You can also see the Forth Bridge, The Forth Road Bridge and the Queensferry Crossing linking North and South Queensferry.
A few minutes later, we penetrate the clouds only to emerge over a splendid sea of snow white.

Not long after taking off, we are approaching the coast of continental Europe. The route from Edinburgh to Italy doesn’t apparently travel through France going over the channel, but takes a faster route crossing the North Sea the Netherlands, going down Germany and entering Italy via Austria.

Not even a pandemic discourages Ryanair from desperately overselling their products under the pretence of duty free. Anyways, the flight continues offering spectacular views as we pass over the white peaks of the Alps.

The sun has just set by the time we approach the meeting point of the Adriatic sea with the water making up the notorious Venice lagoon. Even if Marco Polo Airport is the airport closest to my home town, I haven’t landed there too many times, because of other airports in the area serving much more interesting, and especially cheaper, destinations. But landing there is always a treat.
Remember to always take the window seat on the right side of the plane when landing in Venice: you’ll get a clear view of the main island of Venice connected to the mainland by the Liberty Bridge.

Thank you very much for joining me on this flight from Edinburgh to Venice today! If you like the video, please consider giving me a thumbs up and subscribing. Bye! 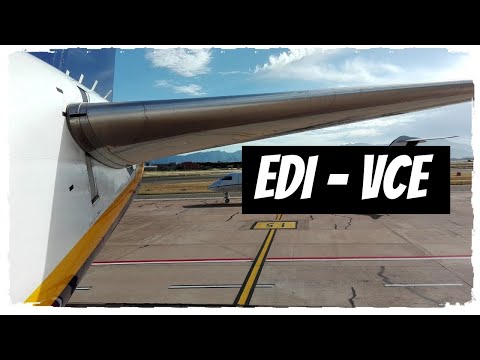 This the flight report from my last flight, the first since the pandemic started: https://www.youtube.com/watch?v=KMQsLgLuqQU&t=106s Hello and welcome...