The Signs of Tesla Semi Coming

This video report talks about the time and signs of Tesla Semi coming. What signs you should look for to know if Tesla Semi's release is near.

Blogger Ty Mcmahan has a very interesting op-ed in Tesla Motors Club about the coming of Tesla Semi in which he writes.

It seems Tesla has been using the same test mules since unveiling the truck. The prototypes have been spotted cruising highways around the U.S. and conducting winter testing in Canada. As we get closer to the anticipated delivery date, you would expect to start seeing more trucks roll out of Tesla’s factory and hit the roads for testing.

However, we still don’t know where the Semi will be built. A chart included in Tesla’s Q3 2019 hints that the truck will be built in the U.S., but does not name a specific location.

With its vehicle offering expanding to seven vehicles soon, you would think Tesla would be running out of the room. Or, that perhaps they don’t plan on building thousands of Semis right away. We should hear more of the company’s production plans in the coming months.

Tesla Semi is a gutsy product. It requires exceptional engineering and trust from a segment that has been blowing diesel smoke for a hundred years. It will be fun to see the impact the Semi will make on the freight industry.

Now I want you to consider the following questions.

Tesla Semi will need mega chargers. Where are the first mega Chargers going to be installed? There would necessarily need to be at LEAST a dozen construction permits pulled already for building mega chargers. Nothing I see online shows evidence of that. So what would be the point of delivery in 2020 towards the end of the year?

Also, how much acreage will be needed for each mega charger and how many Trucks will be able to charge at one time? I am expecting that the Tesla Battery Day, sometimes in April, will answer more questions than anything else since Tesla is production limited by the cells/packs. We'll know a lot more after that presentation.

Please, visit us at https://www.TorqueNews.com/Tesla for daily Tesla news reports and follow us on Twitter at https://twitter.com/torquenewsauto

The Signs of Tesla Semi Coming 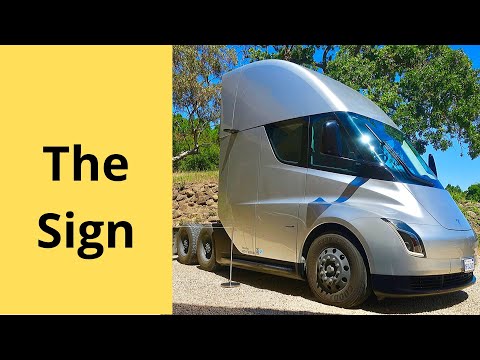 This video report talks about the time and signs of Tesla Semi coming. What signs you should look for to know if Tesla Semi's release is near. Blogger...