A group of 10 people, including a pair wearing giant masks of Finance Minister Olaf Scholz and Economic Affairs Minister Peter Altmaier, protested against the German government's climate policies, outside the Chancellery in Berlin on Wednesday.

The event was organised to coincide with a cabinet meeting on the ruling coalition government's new emergency climate programme, which the demonstrators hold doesn't go far enough.

---
SOT, Matthias, Campact member (German): "We are here from Campact today to demonstrate against the so-called 'Immediate climate programme' of the German federal government. The name alone is already a disappointment. The whole thing is a declaration of intent for the next government to immediately do absolutely nothing. And the measures are as a whole in any case insufficient when it comes to meeting the government's own climate goals."

SOT, Matthias, Campact member (German): "Our action today will be supported by 'Finance Minister Scholz' and 'Economy Minister Altmaier.' They celebrate, namely, that they have now brought this 'Immediate climate programme' into action to show that climate protection is important to them, but the end result is that the whole thing is just a flop, it won't change anything directly, it postpones the problem to the next government and we criticise it for this, and therefore the carton over there is also empty."

SOT, Matthias, Campact member (German): "On our banner we have 'Immediate climate programme' and we've also written 'climate (programme), maybe later' because even these allegedly adopted measures cannot be enacted at all in this legislative period. That means the government simply tells the next government, 'you take care of it please, we won't do any more.' But they like to sell this as an 'immediate programme' which at least sounds like they are doing something, but this is simply false."

SOT, Matthias, Campact member (German): "If the government really took climate protection seriously, then we would have to have to immediately embrace a series of measures, we would have to discuss a higher CO2 price and then set, and then discuss an expansion of renewables, and then we could immediately implement measures such as a high speed limit (on motorways). We consider all these things necessary but unfortunately the government does nothing." 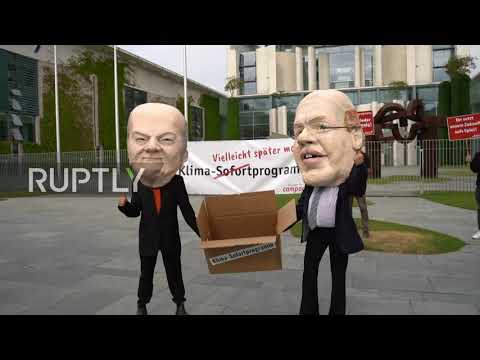 Subscribe to our channel! rupt.ly/subscribe A group of 10 people, including a pair wearing giant masks of Finance Minister Olaf Scholz and Economic Af...